BrianRampage included a mystery whiskey sample along with the Old Forester 1920 sample I had and reviewed this morning. I've been good all day with calories to burn, even after getting called by work. Let's see if I can figure out what this is! 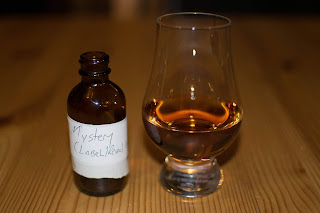 Nose: Big vanilla and a blast of alcohol. This has got to be north of 110 proof and bourbon, or my senses have failed me. Corn, roasted peanuts, cinnamon.

Palate: Vanilla, toffee, peanuts, pepper. The burnt toffee peanut flavor that was echoed on the nose makes me think Beam product based on my limited Bourbon experience. This is over 120 proof, maybe even at 130. There are hints of dark chocolate, and the cinnamon spiciness makes it taste like Mexican chocolate for a moment in the middle. This is racy hot. I'm going to add some water to this after a few more sips.

Finish: Medium-long and dry. Oak and vanilla with a touch of spicy cinnamon predominate.

Nose: The alcohol comes down, letting the corn and vanilla really come forward. I get a slight herbal note that wasn't there before. The peanutty thing is still there in full force.

Palate: Much rounder, it really opened up with that touch of water. The flavors of before are all there, but playing together much more nicely. Still plenty hot, but not tongue numbingly so as it was before. The flavors are big and bold, and there's not a ton of sweetness for a bourbon, though that may well be the drying of the proof killing it.

Finish: Still middling, with big vanilla and oak with a lot of cinnamon heat throughout. Less dry, the water lets the cinnamon and touch of remaining sweetness linger on the tongue much more.

Verdict: While I sipped those over the last hour my wife gathered up the bottle, ripped off the label (Peel back to reveal!) and tossed it and washed the thing. So I've no idea what it is. My first thought was Baker's, but the high proof takes that away, as I don't think Baker's is over 110 proof. My guess is Booker's but I have no idea about batches. I've only had Booker's once, years ago before they started giving all the batches fancy names, and the high proof and peanutty nose and flavor make me think that's what we have here. Whatever this is it's pretty damned good, I'll say that.

Would I buy this: Maybe? Depends on price. If whatever this is is 50-55 bucks, I'd say yes. If cheaper, hell yes. If more expensive, I'd wait for a sale or something. If it's 80, I'd buy Elijah Craig Barrel Proof over this any day.

Would I order this in a bar: Probably. A touch of water made this a pretty good dram, so it would definitely be in the running.

Would I drink this if someone gave me a glass: Yes, absolutely. Lets get some stories rolling and sip a dram.