- December 15, 2018
I normally have scotch as my morning dram on the weekends, but after a rough and tumble night I decided something rough and tumble was fitting for the morning. Big thanks to t8ke for this sample! 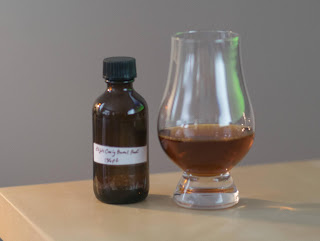 Nose: Dark caramel, clove, baked apple. Less fiery than I'd thought it would be on the nose based on the proof, even sticking my nose down in the glass. The fire is there, sure, but more warming than burning.

Palate: Pecans, demerera sugar, vanilla, big oak notes at the tail. There are tiny flashes of fruit in there, but the bigger flavors overrun them. Drinking it neat requires taking it in as a few tiny drops you allow to explode on your tongue.

Finish: Long finish is looooong. Starts with flamed orange peel, then some sweet oak, and the baking spice stays for an age.

Added water: I added a few drops to the second end of the glass. I usually do cask/barrel strength without it, but this is the highest proof whiskey I've ever had, and while it didn't NEED it, I decided to give it a go. Added water made the fruit flavors really push through. It also made the alcohol really fiery, probably because I was able to take bigger sips that didn't immediately evaporate on my tongue. Still straight up tasty.

Verdict: This is delicious. The flavors are gigantic when you have it neat.

Would I buy this: If I found a bottle, hells yes.

Would I order this in a bar: Oh yes, if I wanted bourbon and a bar had this I'd order it for certain.

Would I drink this if someone gave me a glass: Did we just become best friends?